Lung cancer is a condition in which cells grow uncontrollably inside the lungs (an organ that works to spread oxygen into the blood when breathing in and exhaling carbon dioxide when sighing).

Based on the WHO cancer profile report, lung cancer is the leading contributor to cancer incidence in men in Indonesia, followed by colorectal, prostate, liver and nasopharyngeal cancers, and is the fifth case contributor to women after breast, cervical, colorectal , ovaries. Lung cancer was the first cause of death in cancer in males (21.8%), and the second leading cause of death (9.1%) of cancer in women after breast cancer (21.4%).

In the early stages, lung cancer does not cause any symptoms. The symptoms will only appear when the development of cancer has reached a certain stage. Here are the main symptoms that will be experienced lung cancer patients, including:

Early detection of cancer can improve the success of the treatment process. Here are some tests that can be done to confirm the diagnosis of cancer.

The main cause of lung cancer is smoking, both in active smokers and in passive smokers. But people who do not smoke or exposed to cigarette smoke also can suffer from lung cancer. Some of the causes of lung cancer will be described further below. 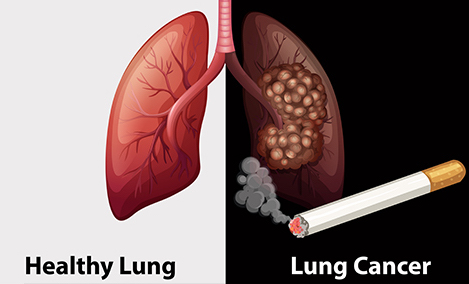 Approximately 80-90 percent of lung cancer cases are caused by smoking habits. So active smokers become the most risky group. Cigarette smoke is inhaled, containing more than 60 toxic substances that can trigger the development of cancer. These toxic substances are known as carcinogenic. For example nicotine used in insecticides and tar used in the manufacture of road asphalt.

Initially, this damage can be repaired by the body. But the repetition and sustainability of smoking causes damage to the lung tissue continues to grow. Damage is what causes the cells to react abnormally until finally emerged cancer cells.

Lung cancer is one type of cancer that can be prevented. Here are some ways you can do: